On October 21, 2020, media reported on a 20-second video clip from a Spanish-language documentary film about Pope Francis. In the film, the Holy Father was shown stating, as translated into English, “Homosexual people have a right to be part of a family. They’re children of God and have a right to a family. Nobody should be thrown out or be made miserable because of it. What we have to create is a [convivencia civil]. That way they are legally covered.” Later reporting indicated this video was compiled from several separate segments in a 2019 interview the Holy Father gave to a Mexican journalist. This footage had never before been played publicly.

Yesterday, we became aware of several clarifications offered at the direction of the Holy Father through his representatives (apostolic nuncios) in each country. The nuncio to the United States, Archbishop Christophe Pierre, confirmed that the pope’s responses to two separate questions were edited and published as a single response, without surrounding context. Archbishop Pierre observes that the first remark – that persons experiencing same-sex attraction have a right to be party of a family, and ought not “be thrown out or be made miserable” – should be read as pastoral counsel to families with children having such experiences, so that their families may receive “respectful pastoral guidance, so that those who manifest a homosexual orientation can receive the assistance they need to understand and fully carry out God’s will in their lives” (quoting from Amoris Laetitia (2016)). (continued in full statement below)

Sioux Falls/Rapid City (October 22, 2020) Yesterday, it was reported that Pope Francis personally endorsed civil unions for same-sex attracted persons. According to the initial media report, these comments were offered in a Spanish-language documentary Read more… 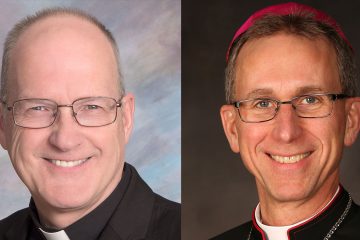 JOINT STATEMENT: THE SPIRITUAL LEADERS OF THE ROMAN CATHOLIC DIOCESES OF SIOUX FALLS AND RAPID CITY Plan for resuming public Mass once social distancing and hygiene practices are in place May 1, 2020 Dear Brothers Read more…

JOINT STATEMENT: THE SPIRITUAL LEADERS OF THE ROMAN CATHOLIC DIOCESES OF SIOUX FALLS AND RAPID CITY Suspension of all public Masses due to the COVID-19/Coronavirus pandemic March 17, 2020 Dear Brothers and Sisters in Christ, Read more…